A few months ago, TfL introduced an 18 month trial of measures in Oakley Square that are intended to reduce motor vehicle speeds to go with a new 20 mph limit.

They have narrowed the traffic lanes to 3m by applying a strip of fake paving on each side of the road as shown in the photo. These strips are not intended to be cycle lanes. People are expected to 'take the lane' as indicated by the Cycle logos in the traffic lane.

Camden Cyclists have had complaints on Twitter and by email about the new layout:

- although there are cycle logos in the traffic lane, drivers tell cyclists that 'take the lane' that they should use the cycle lane.

- the nearside strip is much too narrow to be an adequate cycle lane.

Today we met with TfL officers to discuss the problem. The possible short term measures would be either
1. remove the dashed lines that separate the kerbside strip from the nearside lane so that motors and bikes share a wider kerbside lane (only up to 4m)
or
2. make the kerbside strip part of the footway

We rejected (2) because many cyclists are using the kerbside strip and would find it very unpleasant to share a 3m wide motor lane. 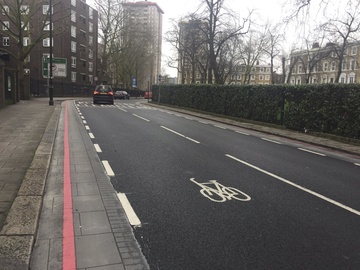